At the first instance I tried to remember the face of Asish but could not. He has mentioned about some places which is a shelter to mentally challenged women and about Blind Schools in Bhubaneswar and also mentioned how we can help them. I have always been keen towards these kind of initiaves but never become an active participant in one till date.The moment I saw the mail from Asish,my first thought was “Yes I should go for it”.Then started the conflict between the mind and the heart.”Should I be able to remain present on the event?”,”This event would definitely be on a weekend.Shall I spend my weekend doing something which I have never done before?”,”What if I do not like it?”. At last decided that let me give it a try and added my note in the GPS saying that I am willing to be a part of this initiative.The time I was adding a note I was unaware that I am going to be a part of an event which is going to change my view and gift me with the best weekend of my life.

It was 4th of August when we heard from Asish once again.By that time I was familiar with Asish’s face and had a few words with him,too 🙂 🙂 . Debendra,my teammate informed me about the event at the blind school and urged that I should be a part of it.He also did not forget to mention that I could also get some good photos of the event as I bought a new DSLR camera only few days ago.I replied with an instant YES. The team had a tough time finding out what could be given as prizes to the winners and finally we zeroed upon Blind Watches.After Asish and me had a very long post lunch exploration on 5th August(2 days before the event),we finally managed to get a vendor who had the watches.We planned to give some blank audio cassettes and cassette players to the kids as they use it to record the sessions delivered in the classes and listen to it later when they need to revise.

On Sunday 7th August,2011 which was Friendship Day too,none of the 12 Mindfireans had any idea that they are going to be gifted with splendid gifts in form of some sweet,adorable,charming and talented little friends. We gathered at the Bhimabhoi Blind School situated at Unit 3,Bhubaneswar at around 1.45 in the afternoon.We have been informed before that we were going to organise a Singing Competition among the kids who are visually challenged.When we entered the auditorium of the school we found some kids were already there and others started coming in slowly.The moment I saw them I was amazed the way they maintain discipline and entered the hall in a line.Some of them are so comfortable while coming to the auditorium that one can hardly figure out that they are blind. Some senior students came with their musical instruments like Tabla,Harmonium and Dholak.And after a short speech from the Headmaster,the competition began.It was a girl who started and the moment she held the mike after her name was announced,the hall was filled with the sound of clapping.If you just have a look at them while clapping you will see that happiness on their faces which was so spontaneous and so natural for encouraging their friend who was standing on the stage. 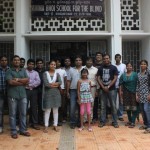 The little girl sang really well.We had almost 35 kids sing beautiful songs most of which were dedicated to Lord Jagannath.The environment was completely changed and we were mesmerized at their performances. Finally the Winners were awarded with the watches and some talented kids were awarded with Tape Recorders. We had snacks together and the kids left for their hostels. Weekends come and weekends go.But there are some weekends whose memories always remain fresh within our minds.This weekend was one of them. We learnt so many things from the kids and were spell bound by their will power to struggle and prove that they are not less capable in any manner than anyone who is blessed with two beautiful eyes. They taught us one imporatnt lesson – “Never give up” as life has different meaning for us in different situations.Yes it might be bit difficult to manage in situations where you are not blessed enough to have the vision but that does not bring our lives to an end.There are still hope and we should go ahead searching for that small ray of hope. With these wonderful thoughts and a sweet smile on my face I left the school campus.Looking forward to be a part of any initiative of this kind in future.