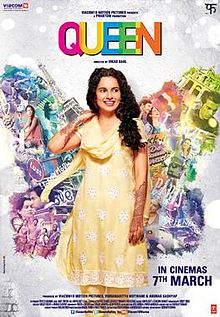 As with every good movie, the story and characters of “Queen” have subtleties you can reflect on, in different contexts. If you have watched the movie, read on!

Right Person in the Right Place
Whether it is casting Kangana Ranaut as the innocent yet liberal Rani or Lisa Haydon as the wild yet affectionate Vijaylakshmi, or Rajkumar Rao as the suave yet creepy jerk – each actor has been hand-picked to fit their role perfectly. This meticulous job at casting does half the director’s job, with each actor naturally cut out for their character. Actors can adapt, but with natural fit one can get a sense of comfortable flow.

The Past Casts its Shadow
We come across characters whose thoughts and behavior today are driven by their past. Rani goes into her own past often, and learns about past lives of several characters. Taka’s attempts to forget, Oleksander’s desire to do his own bit, Rani’s suppressed self and the joy of new-found freedom – characters perceive and respond based on their past. The past is a prism on to the present.

People and Circumstances
While going to visit Roxette in a shady area of Amsterdam, Rani comments that this is perhaps the wrong place – obviously a little unsettled by the environment. Once she meets Rukhsar (aka Roxette), she recognizes a person making a living the best way she can. And in that moment, she understands in her liberal mind that the person and place are different. Circumstances are not the same as a person.

Life has to Go On
An individual, a family, a team, an organization, a country – every now and then each of these have to leave the past behind and move on. The plastered hostel walls are a way for residents to leave a piece of their soul behind when they vacate, so that they may move on and renew their soul without any baggage of the past. You have to respect yet bury the past when it is time to change.

Accepting Differences
Rani meets people who are very different from herself. The bohemian free-wheeling Vijayalakshmi, the pole-dancing Rukhsar, the male friends who live with her and accompany her to a kink shop – these are all new people from a very different world than hers. Yet she connects with them at a deeper level. The people she rejects are the socially acceptable superficial people she knows since years – Vijay and the rest of his clan. Shared human values triumph over language and nationality and other artificial differences.

Craftsmanship
The Italian chef, Marcello, treats his food as his creation, one that has his spirit and soul. It is work born out of love, not for money alone. Rani’s attempts to change it to suit her taste causes him to react strongly – he loves his creation so much that he cannot tolerate disrespect or disfigurement! You react only when you are emotionally invested in your work, else you are indifferent to opinions. Craftsmanship and pride go together.

Money and Value
Marcello does not want Rani’s money for food she didn’t like and didn’t eat. He tries returning it right away, unsuccessfully, but remembers and returns it next time he meets her. Money that comes without any value being delivered is just money, not worthy money. Whereas money is just money when it is used (as Roxette expresses about the money she sends home), it may or may not be worthy when received. To desire only money we are worthy of, and truly earn and deserve, is character.

Quality Speaks for Itself
When Rani’s gol-gappas become a hit, one can trace it to one individual asking for a trial. And while the immediate reaction was disappointing, he goes on to enjoy it – so much so that he asks for repeats. Quality speaks for itself, and is helped along by word-of-mouth, and soon her stall is thronged by customers. Sounds far-fetched but anyone who has had gol-gappa/puchka/gupchup) will agree whole-heartedly! Good stuff can stand its ground.

Now let us take our musings one more step. If you were leading an organization, a team, a mission, yourself…
How would you ensure people are in just the right role where they can bloom and flourish?
How would you appreciate people better based on their past life experience?
How would you separate your view of people from circumstances?
How would you shed the past when moving in a new direction?
How would you recognize and accept people very different from yourself?
How would you build a desire for, and a sense of, pride in work?
How would you create a sense of self-respect – money is to be earned not received?
How would you make quality stuff the world wants more of?

And if you could succeed at the above, wouldn’t you have built a superlative unit?