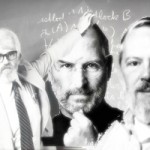 I am not sure if it is an unfortunate coincidence or a sadistic prank by fate that three popular figures of the IT industry who died this month were all pioneers in their respective fields. If you don’t know who Steve Jobs is, I may be able to understand but you would have to be living under a rock to not know of his sad demise. While Steve Jobs died, after a long fight with pancreatic cancer, on 5th October 2011, exactly 1 week later a greater legend breathed his last.  Dennis Ritchie the creator of Unix and the C programming language was found dead in his home on 12th October 2011.  As if the loss to the digital world wasn’t devastating enough, 12 days later, on 24th October, John McCarthy, the inventor of LISP and the  concept of Artificial Intelligence, logged out of the world.